Voters in four states: California, Maine, Massachusetts, and Nevada approved ballot measures legalizing the adult use of cannabis and licensing its commercial production and retail sale. Voters in four additional states: Arkansas, Florida, Montana, and North Dakota approved initiatives legalizing and/or expanding the use and dispensing of cannabis for therapeutic purposes. 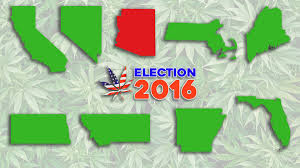 Commenting on the results, Erik Altieiri, NORML's new Executive Director said: "The American people have spoken and spoken clearly. They do not support prosecuting and stigmatizing responsible adults who choose to consume a substance that is safer than either alcohol or many prescription medications. These results provide a mandate to the incoming administration and to Congress to reform federal laws in a manner that comports with marijuana's rapidly changing legal and cultural status."

"These victories represent a repudiation of America's ongoing war against marijuana consumers and the mentality that if 'you do drugs, you do time,'" said NORML Deputy Director Paul Armentano. "Marijuana use and marijuana markets are here to stay, and it is high time to legalize and regulate these activities accordingly."