MARIJUANA LEGALIZATION WHERE IT WILL LIKELY WIN ,AND WHERE IT MAY LOSE

The results of today’s marijuana legalization ballot initiatives will set the stage for the next four years of American drug policy. If California and a number of other states legalize the recreational use of the drug, many observers, including President Obama, say that the a strict federal pot prohibition could soon become untenable. 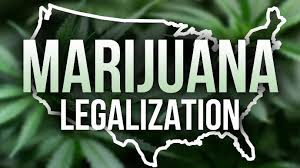 Definitive guide to marijuana on the 2016 ballot: Recreational & medical initiatives

One day out from the election, here’s where the latest polling on the five ballot measures stands. The initiatives in California and Massachusetts appear to be heavily favored to pass, with recent polls indicating support approaching or exceeding 60 percent in both states. The Nevada and Maine legalization measures are favored, but by smaller margins. And polls show a statistical dead heat on the ballot measure in Arizona.

The latest poll, by USC Dornsife and the Los Angeles Times, show 58 percent of voters favor the measure while only 37 percent oppose it. The average of all polls on the question conducted since Sept. 1 shows 56 percent support for the measure, 32 percent opposed to it, and 8 percent undecided.

Prop 64: Why so much of California’s cannabis industry isn’t ready for legalizationThe ballot measure has been riding high in the polls all year, with every single survey on the question showing majority support. Support has been so consistent that a failure to pass the legalization proposal in California would be the only truly surprising outcome among all five state legalization measures.


Recent polls in Nevada have shown divergent outcomes, illustrating the power of different assumptions and methodologies that different pollsters apply to these questions. Support for the measure has been muted in two Bendixen & Amandia International polls, barely achieving a plurality of likely voters. But polls conducted by KTNV- TV 13 and Rasmussen at the same time show more robust support.


Polls indicate Arizona is the one true toss-up among the five marijuana legalization measures under consideration. Across six surveys conducted since September 1, the measure has crossed the 50 percent threshold only twice. Averaged out, the numbers show 47 percent support for the measure, 46 percent opposed to it, and 7 percent undecided. The direction those undecided voters take will determine the fate of the measure. One ballot measures like this one, undecided voters often break toward the status quo.


Maine is tough to judge as only two polls on the marijuana measure have been fielded since Sept. 1. Both show majority support for the measure, averaging out at 52 percent in favor and 40 percent opposed. That’s enough to make legalization the most likely outcome, but with only two data points the numbers here aren’t as robust as they are in other states.


Massachusetts may be the most interesting marijuana contest on the ballot this fall. Political leaders across the party spectrum have urged voters to reject it. The Boston Archdiocese of the Catholic Church gave $850,000 dollars to fight the measure, the largest-ever donation from a religious group on any side of a marijuana initiative. As recently as the spring and summer support for legalization in Massachusetts appeared to be lagging behind the four other states, hovering in the low-40 percent range.
But starting in the fall that began to change. Every poll conducted from September onward has shown legalization with majority or plurality support. The latest, conducted by Western New England University at the end of October, gives supporters a nearly 30 percentage point edge over opponents.

Overall, the legalization measure enjoys and average of 54 percent support over the latest six polls, with only 35 percent opposing it.

There’s more than full legalization on the ballot this year, too. Voters in four other states are considering various medical marijuana provisions. In Florida, a reprise of 2014’s failed medical pot initiative appears to be doing much better this go-round, with polls showing well over the 60 percent support needed for passage.

Montana voters are deciding whether to roll back a number of restrictions the legislature recently placed on the state’s long-standing medical marijuana laws. Only one poll has been conducted on that question, in October, and it showed that a majority of voters were happy with the new restrictive provisions as-is.

Medical pot is on the ballot in Arkansas, too. Muddying the waters there are technically two medical pot provisions on the ballot, but due to a cascade of lawsuits and signature problems votes will only count for one of them. Polls on the question have been mixed, hovering just around 50 percent since September.
Finally, a standard medical marijuana provision is on the ballot in deep-red North Dakota, too. But nobody seems to have told the nation’s pollsters about it – there hasn’t been a single survey on that question all year.

special thanks to:
for there professionalism in marijuana reform
http://www.thecannabist.com