November 9, 2016 - Californians have approved Prop. 64 to legalize adult use of marijuana by a margin of 56-44%. The approval of Prop. 64 by the nation’s largest state should send a powerful message to lawmakers in Washington, DC and the world to end marijuana prohibition. Nearly two thirds of California counties approved the measure, which should help local reform efforts. 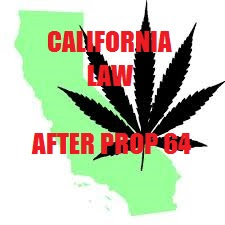 As of Nov. 9th it became legal for any adult 21 years or older to:

•  Possess, transport, obtain or give away to other adults 21 or older no more than one ounce of marijuana or 8 grams of concentrated cannabis.

•  Cultivate up to six plants per residence and possess the marijuana produced by these plants.  All plants and harvest in excess of one ounce must be kept in a locked space not in public view at one’s residence.  Local governments may still forbid cultivation outdoors, but must allow it inside a private residence or accessory structure that is “fully enclosed and secure.”

• Medical marijuana patients keep their existing rights under Prop 215 to possess and cultivate as much as they need for personal medical use so long as they have a doctor’s recommendation, regardless of the Prop 64 limits for adult users. Beware though that local governments may still restrict cultivation via nuisance ordinances (except for the six indoor plant minimum allowed for personal use).

•  Retail sales for adult use will not begin until licensed stores are in operation after Jan 1, 2018.  In the meantime, Prop 215 patients with a doctor’s recommendation can continue to purchase at medical collectives and dispensaries.

•  Tax Tip for 215 Patients:  Patients who have a state medical marijuana ID card will be exempt from the state sales tax immediately, according to the State Board of Equalization.  If you spend more than $100 per month on medicine, it should pay you to get a state ID card.  State ID cards are available from county health departments;  under Prop 64 the card fees are capped  at $100 ($50 for Medi-Cal patients).

• Consume marijuana in any public place ($100 infraction).   (On-site consumption at licensed premises will be permitted at a later date.)

• Smoke or vaporize marijuana in any non-smoking area or within 1,000 feet of a school, day care or youth center while children are present, except privately at a residence. ($250 fine)

• Consume marijuana or possess an “open container” of marijuana while driving or riding as a passenger in any motor vehicle, boat, or airplane ($250 fine).

• Possess or use marijuana on the grounds of a school, day care or youth center while children are present. ($100 fine).

• Manufacture concentrated cannabis with a volatile solvent (except for state-licensed manufacturers).

• Minors under 21 may not possess, use, transport, or cultivate marijuana, subject to a $100 fine for those 18 and older.  Minors under 18 are subject to drug counseling or community service.

• Possession of more than one ounce remains a misdemeanor punishable by $500 and/or six months in jail as at present.  Other offenses, including cultivation of over six plants, transport of over an ounce, illegal sale or distribution for compensation, possession with intent to sell, etc., are downgraded from felonies to misdemeanors except in certain aggravating circumstances.

Rights NOT protected by Prop 64:

• Owners may forbid the possession or use of marijuana on their property subject to normal tenant law for renters.

• Employers may prohibit use of marijuana by their employees.


Prior offenders:  If you have been convicted for a marijuana felony or other offense that has been downgraded by Prop 64, you may petition the court to have your record changed to what it would be if Prop 64 had been in effect.


SPECIAL THANKS TO : CALIFORNIA NORML for their support and expertize in marijuana reform http://www.canorml.org