MARIJUANA ARRESTS AT ALL TIME LOW, STILL ON AVERAGE SOMEONE IS ARRESTED ONE EVERY MINUTE

Police made fewer AND ALOT arrests for marijuana-related offenses last year than they have in any year since 1996, according to CRIMEDATA the FBI released Monday.

Still with that being said statistics show astounding number of arrests, authorities in the U.S. made 643,000 arrests for marijuana-related charges in 2015 ― or about one every 49 seconds. Charges related to the drug accounted for 5.9 percent of all arrests, and about 43.2 percent of all drug arrests.

The number of marijuana arrests has been generally decreasing since peaking in 2007. That year, police made 872,720 total arrests related to the drug, including 775,137 for possession. Just about 574,000 marijuana-related arrests in 2015 involved possession, and arrests for the sale and manufacture of the drug reached a nearly 25-year low 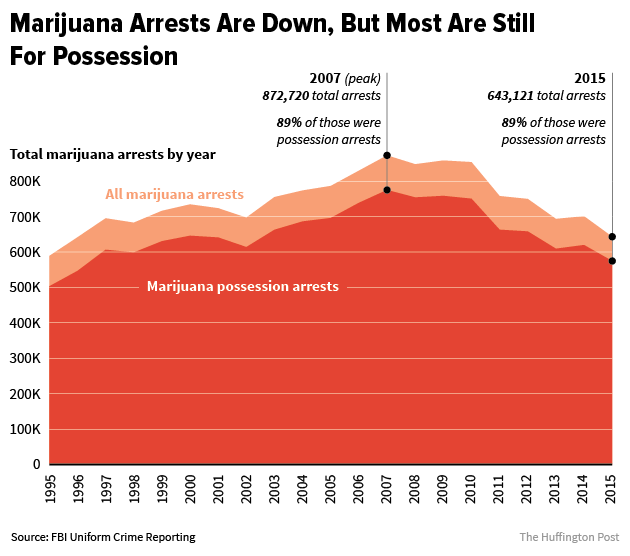 Tom Angell, chairman of the drug policy reform group Marijuana Majority, told The huffington post that law enforcement’s priorities are still out of sync with the majority of Americans.

Opponents to legalization often downplay the significance of marijuana arrests, arguing that they don’t lead to severe punishments forgeting to address that they make money of fines, drug rehabilitation and evaluation programs and that a very small percentage of Americans wind up jailed for low-level marijuana offenses.

Yet a recent report from the Drug Policy Alliance found that getting arrested for marijuana can still significantly affect a person, even though marijuana-related penalties have been scaled back in many places over recent years.

“A marijuana arrest is no small matter,” reads the report, which also shows that most people arrested for marijuana are held in jail for a day or more. Many are also branded with a permanent criminal record, which can hurt their employment status and access to education and housing.not mentioning facts about drug evaluations one must under go to complete many are then are put on probation payin money for supervision fees,evaluation costs, lawyer fees,wich all effect the person arrested and his family,job etc

Additionally, a one-year HuffPost analysis of jail deaths found that several inmates arrested on a marijuana offense died behind bars.

“While the numbers are thankfully dropping over time, it’s alarming and simply unacceptable that someone is harassed by the police just for marijuana every 49 seconds in this country,” Angell said. “Polls now consistently show that a growing majority of Americans supports full legalization, and it’s about time more politicians and law enforcement caught up.”

in continuing support in marijuana reform all mistakes are the authors.