Sex and drugs are often spoken of together when discussing the taboo acts of many adolescents. Many people experiment with both sex and drugs, sometimes at the same time. Marijuana is a commonly used drug that is often used in conjunction with sex. Marijuana can have a varied impact on the brain, body, health, sex, and relationships of every individual. 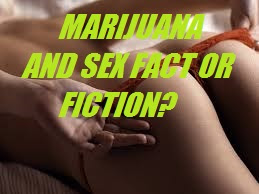 There are many different methods of consuming and feeling the effects of marijuana. Most people who use cannabis grind up the dried leaves of the plant and smoke it by way of joint, pipe, bong, vaporizer. The active chemicals in marijuana can also be consumed through an edible. An edible is any form of food that is infused with the extracted chemicals from marijuana. The increasing popularity of marijuana amongst those in the United States has brought about many creative ways to intake the drug. THC extract, a concentrated form of the active chemical that can be smoked or added to various foods and drinks, has become another admired and highly effective form of marijuana consumption.1 Along with the many ways to smoke marijuana, there are also many variations in plant breed. Two of the most notable types are Indica and Sativa.2

Strains, or varied forms, of cannabis that are of the indica breed are known to cause a stronger “body-high.” Users describe this high as more of a “full-body sensation” with a “couch-lock” effect, like having no desire to move from the comfortable position on the couch.2

Strains of cannabis that are of the sativa breed are known to cause a more “uplifting and cerebral high” and are seen as “energizing and stimulating” to users. 2

Many users report that indica affects their body and sativa affects their mind, which are both explained in further detail below. There are also many hybrid strains of cannabis that incorporate both the effects of indica and sativa.2
Pros
Increased Desire

A 1984 study cited by Psychology Daily found users to have an increased libido after smoking marijuana. While the study may be outdated, users still claim to have increased sexual desires when under the influence of the flower. This is due to an endless possibility of variables that still need to be scientifically proven, but delving into claim after claim, we believe using marijuana pre-foreplay does make you more aroused.

When it comes to marijuana, the topic of heightened senses is one of the most addressed. Users frequently claim that sex feels better when they’re high. This study shows that users feel more relaxed, euphoric and emotional—all good things in the bedroom. If you think about sex in terms of a massage, you're more likely to enjoy and benefit from it if you are completely relaxed. If you're tense, the likelihood of it feeling good is slim to none.

There’s even a cannabis infused lubricant called Foria that claims to make sex more pleasurable for women in the form of extremely long and intense orgasms. Their testimonials seem to back up the hype too, having users discuss their unbelievable experiences, but this first-hand experience really drives the message home.

In the same study cited above, the cannabis users claimed that their perception of time was stretched. This is good news for both parties involved! If sex doesn’t last as long as you’d hope, it’ll probably feel like it’s minutes (if not hours) longer. While that not may sound like much, it could make all the difference.

Directly related to both increased sensitivity and the perception of time, intense orgasms are often related to consuming some herb pre-coitus. In an interview with NYM8ag, a user under the pseudonym Elizabeth claimed that “orgasms seem to last for 30 seconds and are incredibly intense. The best orgasms I’ve ever had have been while stoned, whether with another person or solo.” Really, that speaks for itself.

The American Academy of Neurology conducted a study looking at the effects of marijuana related to dosage. Unsurprisingly, the more you smoked the worse (or better depending on your end goal) the effects. In relation to sex, this means if you smoke too much you won’t be getting any. You’ll be too high to do much of anything let alone trying to pleasure yourself or your partner. The challenge with marijuana and sex—unless you’re a veteran user who knows the effects of the strain—you won’t know if you had too much until it’s too late.

If you’re trying to get pregnant, marijuana is not your friend, though this does not mean it’s a great form of birth control. Rather, smoking marijuana will lower the chances of a man impregnating a woman because of its effect on sperm production.

According to Dr. Julie Holland in an interview with Vice, smoking cannabis can lead to vaginal dryness. This is due to the drying of mucous membranes, so it is exactly like cotton mouth, except it’s down there. And if we know one thing, it's that that's not going to set the mood. Not at all.

Any sort of mind-altering substance can make you careless. A study found that when under the influence, whether it be from alcohol or marijuana, users make poor decisions which make them more susceptible to contracting an STI. If you’re too high to inquire about the other party being tested or think you will forget to use protection, you should probably skip the sex. Of course, if you know your partner's history, you're probably safe, but it's something to keep in mind.

Bottom Line
Marijuana’s effects are unique to every individual. While some claim that sex under the influence is not for them, many note that a pre-sex sesh can do wonders for libido and really make magic happen in the bedroom—so much so that the results are mind-blowing. If you're going to experiment just remember what Oscar Wilde said: “Everything is good in moderation, including moderation.”