DONALD TRUMPS ..SUPPORTS MEDICAL MARIJUANA 100% BUT IS IT ALL JUST FOR A VOTE?

DONALD TRUMPS ..SUPPORTS MEDICAL MARIJUANA 100% BUT IS IT ALL JUST FOR A VOTE ? 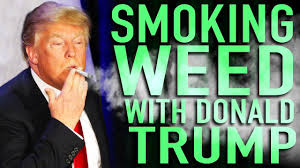 Right after officially receiving the Republican presidential nomination, Donald Trump is already creating rifts between himself and the party platform. Trump has said that he supports medical cannabis “100 percent” and has signaled that, if elected, he would allow states to implement their own laws without federal interference.

“The progress made over the last three decades against drug abuse is eroding, whether for cultural reasons or for lack of national leadership,” the 2016 GOP platform states. “In many jurisdictions, marijuana is virtually legalized despite its illegality under federal law. At the other end of the drug spectrum, heroin use nearly doubled from 2003 to 2013,

while deaths from heroin have quadrupled. All this highlights the continuing conflicts and contradictions in public attitudes and public policy toward illegal substances. Congress and a new administration should consider the longrange implications of these trends for public health and safety and prepare to deal with the problematic consequences.”

As previously reported, the GOP Platform Committee recently shut-down attempts from delegates to create amendments in the platform that would allow support for medDonald Trump softened his tone on marijuana legalization on Thursday, saying at a political rally that states should be allowed to legalize marijuana if they chose to do so. Trump reaffirmed that he supports making medical marijuana available to patients who are very sick.

"In terms of marijuana and legalization, I think that should be a state issue, state-by-state," Trump said while taking a handful of questions during a political rally at a casino outside Reno on Thursday afternoon.

His comments came hours after the third Republican debate was held in Colorado, which legalized marijuana for recreational use in 2012. That same day, Democratic presidential hopeful Bernie Sanders said he wants to remove marijuana from the federal government's list of most dangerous outlawed drugs, which would make it easier for states to legalize it.

Trump -- who says he doesn't drink or smoke tobacco, let alone experiment with drugs -- has taken a variety of stances on drug control. In April 1990, Trump said at a luncheon in Florida that the United States should legalize drugs and use the money collected to educate the public on the dangers of drug use.ical cannabis and a stark evaluation of the current state of the drug war in America.

ANYTHING FOR A VOTE IS HONESTLY WHERE HE STANDS? ! JUST A OPINION ? 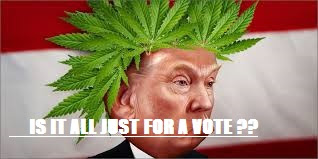 We're losing badly the war on drugs," Trump said at the time, according to an article in the Sarasota Herald-Tribune. "You have to legalize drugs to win that war. You have to take the profit away from these drug czars."

[Inside the world of Donald Trump's super fans]

More recently, Trump has supported allowing medical marijuana but firmly opposed legalization. During the CPAC conference in June, Trump was asked about Colorado's legalization and responded: "I say it's bad. Medical marijuana is another thing, but I think it's bad, and I feel strongly about it."

Sean Hannity, who was moderating the forum, then asked Trump if legalization is a states' rights issue or not.

When the question of legalization came up during a rally in Nevada on Thursday, Trump was less dismissive of the idea. Nevada recently legalized medical marijuana.

"Marijuana is such a big thing," Trump said. "I think medical should happen -- right? Don't we agree? I think so. And then I really believe we should leave it up to the states."

Trump waited for the applause to die down in the crowd, which skewed older, and then addressed the state he had just visited.

"And of course you have Colorado," Trump said. "And I love Colorado and the people are great, but there's a question as to how it's all working out there, you know? That's not going exactly trouble-free. So I really think that we should study Colorado, see what's happening."

As Trump has started to slip in some early polls, he has taken a softer tone on the campaign trail. During an hour-long appearance on Thursday, Trump didn't directly attack his opponents, seeming to try to instead differentiate himself by providing a more detailed introduction.

Local Politics Alerts
Breaking news about local government in D.C., Md., Va.
Sign up
Trump complimented Sen. Marco Rubio (R-Fla.) and Sen. Ted Cruz (R-Tex.) on their debate performances and thanked former Arkansas governor Mike Huckabee for defending him when moderators asked if he was a more moral person than Trump. The only time when Trump mentioned retired surgeon Ben Carson, who is now beating him in Iowa, was to say that the two partnered up to pressure CNBC to keeping its debate contained to two hours.

"They folded in about 15 seconds," Trump said, to cheers.

Instead, Trump directed his ire at the media that he says has not fairly or accurately covered his candidacy. At one point, Trump gestured to reporters in the back of the room, calling them "the scum back there." As Trump took questions from the audience, one man suggested getting rid of debate moderators all together.

[GOP candidates tangle with each other -- and CNBC -- during debate]

"I guarantee you, these moderators are not big Republican voters," Trump said. "And if we're having a Republican debate, maybe every moderator should show that they vote Republican. Because why should we have these people that hate everything that we stand for?"

THANKS TO WASHINGTON POST FOR THEIR INSIGHT ON THIS..AND CREATIVE WRITING